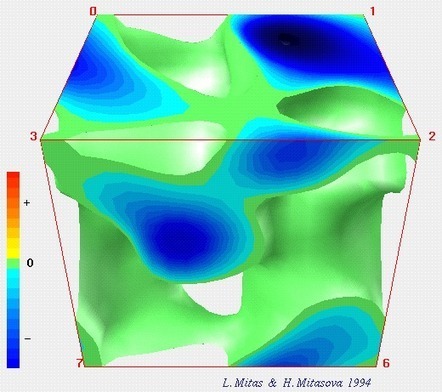 At the heart of quantum mechanics is the wave-particle duality: matter and light possess both wave-like and particle-like attributes. Typically, the wave-like properties are inferred indirectly from the behavior of many electrons or photons, though it’s sometimes possible to study them directly. However, there are fundamental limitations to those experiments—namely information about the wave properties of matter that is inherently inaccessible.

And therein lies a loophole: two groups used indirect experiments to reconstruct the wave structure of electrons. A.S. Stodolna and colleagues manipulated hydrogen atoms to measure their electron’s wave structure, validating more than 30 years of theoretical work on the phenomenon known as the Stark effect. A second experiment by Daniel Lüftner and collaborators reconstructed the electronic structure of individual organic molecules through repeated scanning, with each step providing a higher resolution. In both cases, the researchers were able to match theoretical predictions to their results, verifying some previously challenging aspects of quantum mechanics.

Neither a wave nor a particle description can describe all experimental results obtained by physicists. Photons interfere with each other and themselves like waves when they pass through openings in a barrier, yet they show up as individual points of light on a phosphorescent screen. Electrons create orbital patterns inside atoms described by three-dimensional waves, yet they undergo collisions as if they were particles. Certain experiments are able to reconstruct the distribution of electric charge inside materials, which appears very wave-like, yet the atoms look like discrete bodies in those same experiments.

The wave functions in the Stark effect have a peculiar mathematical property, one which Stodolna and colleagues recreated in the lab. They separated individual hydrogen atoms from hydrogen sulfide (H2S) molecules, then subjected them to a series of laser pulses to induce specific energy transitions inside the atoms. By measuring the ways the light scattered, the researchers were able to recreate the predicted wave functions—the first time this has been accomplished. The authors also argued that this method, known as photoionization microscopy, could be used to reconstruct wavefunctions for other atoms and molecules.

Lüftner and colleagues took a different approach and examined the wave functions of organic molecules chemically attached (adsorbed) on a silver surface. Specifically, they looked at pentacene (C22H14) and the easy-to-remember compound perylene-3,4,9,10-tetracboxylic dianhydride (or PTCDA, C24H8O6). Unlike hydrogen, the wave functions for these molecules cannot be calculated exactly. They usually require using “ab initio” computer models.

The researchers were particularly interested in finding the phase, that bit of the wave function that can’t be measured directly. They determined that they could reconstruct it by using the particular way the molecules bonded to the surface, which enhanced their response to photons of a specific wavelength. The experiment involved taking successive iterative measurements by exciting the molecules using light, then measuring the angles at which the photons were scattered away.

Reconstructing the phase of the wave function required exploiting the particular mathematical form it took in this system. Specifically, the waves had a relatively sharp edge, allowing the researchers to make an initial guess and then refine the value as they took successive measurements. Even with this sophisticated process, they were only able to determine the phase to an arbitrary precision—something entirely to be expected from fundamental quantum principles. However, they were able to experimentally reconstruct the entire wave function of a molecule. There was previously no way to check whether our calculated wave functions were accurate or not.