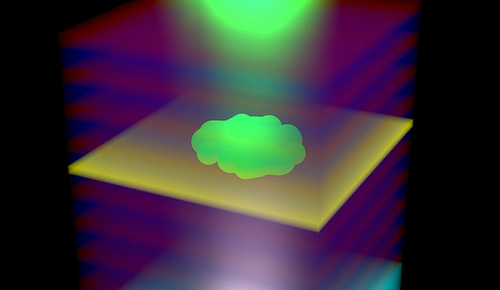 The quantum mechanical phenomena, known as Bose-Einstein Condensate (BEC), was first demonstrated in 1995 when experiments proved that the septuagenarian theory did in fact exist in the physical world. Of course, to achieve the phenomena a state of near absolute zero (-273 Celsius, -459 Fahrenheit) had to be created.

Now researchers at IBM’s Binnig and Rohrer Nano Center have been able to achieve the BEC at room temperature using a specially developed polymer, a laser, and some mirrors.

IBM believes that this experiment could potentially be used in the development of novel optoelectronic devices, including energy-efficient lasers and ultra-fast optical switches. One application for BEC is for the building of so-called atom lasers, which could have applications ranging from atomic-scale lithography to measurement and detection of gravitational fields.

For the first time, the IBM team achieved it at room temperature by placing a thin polymer film—only 35 nanometers thick—between two mirrors and then shining a laser into the configuration. The bosonic particles are created as the light travels through the polymer film and bounces back and forth between the two mirrors.

While this BEC state of matter only lasts for a few picoseconds (trillionths of a second), the IBM researchers believe that it exists long enough to create a source of laser-like light or an optical switch that could be used in optical interconnects.

“That BEC would be possible using a polymer film instead of the usual ultra-pure crystals defied our expectations,” said Dr. Thilo Stöferle, a physicist, at IBM Research, in a press release. “It’s really a beautiful example of quantum mechanics where one can directly see the quantum world on a macroscopic scale.”

Now that the researchers have managed to trigger the effect, they are now looking to gain more control over it. In the process they will be evaluating how the effect could best be exploited for a range of applications. One interesting application that will be examined is using the BEC in analog quantum simulations for such macroscopic quantum phenomena as superconductivity, which is extremely difficult to model with today’s simulation approaches.