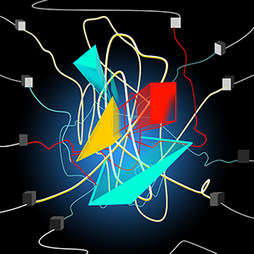 Sentient claims to have assembled machine-learning muscle to rival Google by rounding up idle computers.

Recent improvements in speech and image recognition have come as companies such as Google build bigger, more powerful systems of computers to run machine-learning software. Now a relative minnow, a private company called Sentient with only about 70 employees, says it can cheaply assemble even larger computing systems to power artificial-intelligence software. The company’s approach may not be suited to all types of machine learning, a technology that has uses as varied as facial recognition and financial trading. Sentient has not published details, but says it has shown that it can put together enough computing power to produce significant results in some cases.

Sentient’s power comes from linking up hundreds of thousands of computers over the Internet to work together as if they were a single machine. The company won’t say exactly where all the machines it taps into are. But many are idle inside data centers, the warehouse-like facilities that power Internet services such as websites and mobile apps, says Babak Hodjat, cofounder and chief scientist at Sentient. The company pays a data-center operator to make use of its spare machines.

Data centers often have significant numbers of idle machines because they are built to handle surges in demand, such as a rush of sales on Black Friday. Sentient has created software that connects machines in different places over the Internet and puts them to work running machine-learning software as if they were one very powerful computer. That software is designed to keep data encrypted as much as possible so that what Sentient is working on–perhaps for a client–is kept confidential.

Sentient can get up to one million processor cores working together on the same problem for months at a time, says Adam Beberg, principal architect for distributed computing at the company. Google’s biggest machine-learning systems don’t reach that scale, he says. A Google spokesman declined to share details of the company’s infrastructure and noted that results obtained using machine learning are more important than the scale of the computer system behind it. Google uses machine learning widely, in areas such as search, speech recognition and ad targeting.

Beberg helped pioneer the idea of linking up computers in different places to work together on a problem (see “Innovators Under 35: 1999”). He was a founder of Distributed.net, a project that was one of the first to demonstrate that idea at large scale. Its technology led to efforts such as Seti@Home andFolding@Home, in which millions of people installed software so their PCs could help search for alien life or contribute to molecular biology research.

Sentient was founded in 2007 and has received over $140 million in investment funding, with just over $100 million of that received late last year. The company has so far focused on using its technology to power a machine-learning technique known as evolutionary algorithms. That involves “breeding” a solution to a problem from an initial population of many slightly different algorithms. The best performers of the first generation are used to form the basis of the next, and over successive generations the solutions get better and better.

Sentient currently earns some revenue from operating financial-trading algorithms created by running its evolutionary process for months at a time on hundreds of thousands of processors. But the company now plans to use its infrastructure to offer services targeted at industries such as health care or online commerce, says Hodjat.

Sourced through Scoop.it from: www.technologyreview.com