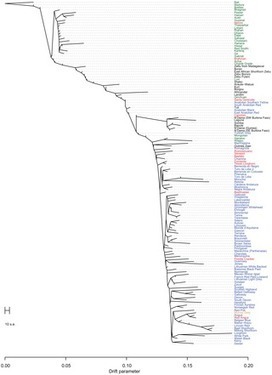 Cattle were independently domesticated from the aurochs, a
wild bovine species, in the vicinity of the current countries of
Turkey and Pakistan ∼10,000 y ago. Cattle have since spread
with humans across the world, including to regions where these
two distinct lineages have hybridized. Using genomic tools, we
investigated the ancestry of cattle from across the world. We
determined that the descendants of the cattle brought to the
New World by the Spanish in the late 1400s show ancestry
from multiple domesticated lineages. This pattern resulted
from pre-Columbian introgression of genes from African cattle
into southern Europe.

The domestication and development of cattle has considerably impacted human societies, but the histories of cattle breeds and populations have been poorly understood especially for African, Asian, and American breeds. Using genotypes from 43,043 autosomal single nucleotide polymorphism markers scored in 1,543 animals, a group of scientists now evaluatee the population structure of 134 domesticated bovid breeds. Regardless of the analytical method or sample subset, the three major groups of Asian indicine, Eurasian taurine, and African taurine were consistently observed.

Patterns of geographic dispersal resulting from co-migration with humans and exportation were recognizable in phylogenetic networks. All analytical methods revealed patterns of hybridization which occurred after divergence. Using 19 breeds, the researchers mapped the cline of indicine introgression into Africa. They inferred that African taurine possess a large portion of wild African auroch ancestry, causing their divergence from Eurasian taurine. They detected exportation patterns in Asia and identifed a cline of Eurasian taurine/indicine hybridization in Asia. They also identifed the influence of species other than Bos taurus taurus and B. t. indicus in the formation of Asian breeds. They detected the pronounced influence of Shorthorn cattle in the formation of European breeds. Iberian and Italian cattle possess introgression from African taurine. American Criollo cattle originate from Iberia, and not directly from Africa with African ancestry inherited via Iberian ancestors. Indicine introgression into American cattle occurred in the Americas, and not Europe. The researchers argued that cattle migration, movement and trading followed by admixture have been important forces in shaping modern bovine genomic variation.