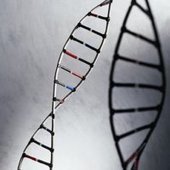 Professor of Genetics Scott Williams, PhD, of the Institute for Quantitative Biomedical Sciences (iQBS) at Dartmouth’s Geisel School of Medicine, has made two novel discoveries: first, a person can have several DNA mutations in parts of their body, with their original DNA in the rest—resulting in several different genotypes in one individual—and second, some of the same genetic mutations occur in unrelated people. We think of each person’s DNA as unique, so if an individual can have more than one genotype, this may alter our very concept of what it means to be a human, and impact how we think about using forensic or criminal DNA analysis, paternity testing, prenatal testing, or genetic screening for breast cancer risk, for example. Williams’ surprising results indicate that genetic mutations do not always happen purely at random, as scientists have previously thought. His work, done in collaboration with Professor of Genetics Jason Moore, PhD, and colleagues at Vanderbilt University, was published in PLOS Genetics journal.[1]

Genetic mutations can occur in the cells that are passed on from parent to child and may cause birth defects. Other genetic mutations occur after an egg is fertilized, throughout childhood or adult life, after people are exposed to sunlight, radiation, carcinogenic chemicals, viruses, or other items that can damage DNA. These later or “somatic” mutations do not affect sperm or egg cells, so they are not inherited from parents or passed down to children. Somatic mutations can cause cancer or other diseases, but do not always do so. However, if the mutated cell continues to divide, the person can develop tissue, or a part thereof, with a different DNA sequence from the rest of his or her body.

“We are in reality diverse beings in that a single person is genetically not a single entity—to be philosophical in ways I do not yet understand—what does it mean to be a person if we are variable within?” says Williams, the study’s senior author, and founding Director of the Center for Integrative Biomedical Sciences in iQBS. “What makes you a person? Is it your memory? Your genes?” He continues, “We have always thought, ‘your genome is your genome.’ The data suggest that it is not completely true.”

In the past, it was always thought that each person contains only one DNA sequence (genetic constitution). Only recently, with the computational power of advanced genetic analysis tools that examine all the genes in one individual, have scientists been able to systematically look for this somatic variation. “This study is an example of the type of biomedical research project that is made possible by bringing together interdisciplinary teams of scientists with expertise in the biological, computational and statistical sciences.” says Jason Moore, Director of the iQBS, who is also Associate Director for Bioinformatics at the Cancer Center, Third Century Professor, and Professor of Community and Family Medicine at Geisel.

Having multiple genotypes from mutations within one’s own body is somewhat analogous to chimerism, a condition in which one person has cells inside his or her body that originated from another person (i.e., following an organ or blood donation; or sometimes a mother and child—or twins—exchange DNA during pregnancy. Also, occasionally a person finds out that, prior to birth, he or she had a twin who did not survive, whose genetic material is still contained within their own body).[2] Chimerism has resulted in some famous DNA cases: one in which a mother had genetic testing that “proved” that she was unrelated to two of her three biological sons.[3]

As suggested by Maria Schnee (newphoenix.info)