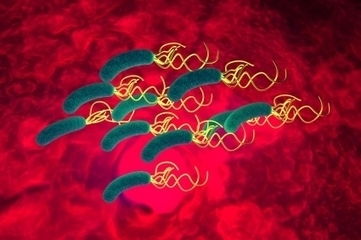 Researchers from Southern Medical University in Guangdong, Guangzhou, China, have developed an oral vaccine against Helicobacter pylori, the bacteria responsible for peptic ulcers and some forms of gastric cancer, and have successfully tested it in mice. The research is published ahead of print in the journal Clinical and Vaccine Immunology.

The investigators constructed a live recombinant bacterial vaccine, expressing the H. pylori antigen, adhesin Hp0410, in the food-grade bacterium, Lactobacillus acidophilus. They then used it to orally vaccinate the mice.

The vaccine elicited specific anti-Hp0410 IgG antibodies in serum, and showed “a significant increase” in the level of protection against gastric Helicobacter infection, according to the report. When assayed, following challenge with H. pylori, immunized mice had significantly lower bacterial loads than non-immunized mice.

H. pylori is a class 1 human carcinogen, according to the World Health Organization. It causes gastritis, peptic ulcers, stomach cancer, and mucosa-associated lymphoid tissue lymphoma. Antibiotic therapy is complex, unsuccessful in some patients (particularly in developing countries) and relapse is common. A vaccine against H. pylori could circumvent these difficulties.