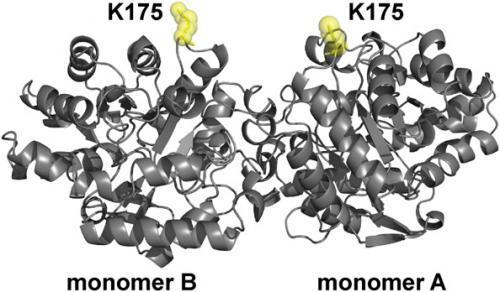 Proteins accomplish something rather amazing: A protein can have many functions, with a given function being determined by the way they fold into a specific three-dimensional geometry, or conformations. Moreover, the structural transitions form one conformation to another is reversible. However, while these dynamics affect protein conformation and therefore function, and so are critical to a wide range of areas, methods for understanding how proteins behave near surfaces, which is complicated by protein and surface heterogeneities, has remained elusive. Recently, however, scientists at University of Colorado utilized a method known as Single-Molecule Förster Resonance Energy Transfer (SM-FRET) tracking to monitor dynamic changes in protein structure and interfacial behavior on surfaces by single-molecule Förster resonance energy transfer, allowing them to explicate changes in protein structure at the single-molecule level. (SM-FRET describes energy transfer between two chromophores – molecular components that determine its color.) In addition, the researchers state that their approach is suitable for studying virtually any protein, thereby providing a framework for developing surfaces and surface modifications with improved biocompatibility.

Prof. Joel L. Kaar discussed the paper he and his co-authors, Dr. Sean Yu McLoughlin, Prof. Mark Kastantin and Prof. Daniel K. Schwartz, recently published in Proceedings of the National Academy of Sciences. “The primary challenges in devising our approach to characterizing changes in protein structure were implementing a site-specific labeling method, which enabled single-molecule resolution, as well as a method to only image molecules at the solution-surface interface,” Kaar tells Phys.org. The scientists overcame the former challenge by incorporating unnatural amino acids – that is, those not among the 20 so-called standard amino acids – with unique functional groups for labeling with fluorophores (chemical compounds that can re-emit light upon light excitation); the latter, by using total internal reflection fluorescence microscopy, which only excites molecules in the near-surface environment, thereby minimizing the background fluorescence of molecules free in solution. “Although site-specific labeling methods have been used to monitor changes in protein conformation mainly in bulk solution, such techniques have not previously been exploited to study freely diffusible protein molecules at interfaces,” Kaar adds. As such, the researchers are the first to apply site-specific labeling methods to study protein-surface interactions.

“The major challenge associated with incorporating unnatural amino acids for labeling was related to the optimization of protein expression,” Kaar continues. Specifically, he explains, the expression of the enzyme organophosphorus hydrolase (OPH) – which is notoriously difficult to make in large quantities due to inclusion body formation – with the unnatural amino acid p-azido-L-Phe (AzF) had to be optimized to efficiently incorporate p-azido-L-Phe. (Inclusion body formation refers to the intracellular aggregation of partially folded expressed proteins,) “This process required modification of expression conditions,” he adds, “in which bacteria with modified genetic machinery were grown to enable production of soluble enzyme for single-molecule experiments.”