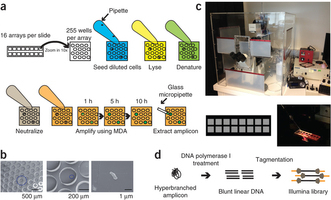 Researchers led by bioengineers at the University of California, San Diego have generated the most complete genome sequences from single E. coli cells and individual neurons from the human brain. The breakthrough comes from a new single-cell genome sequencing technique that confines genome amplification to fluid-filled wells with a volume of just 12 nanoliters. “Our preliminary data suggest that individual neurons from the same brain have different genetic compositions. This is a relatively new idea, and our approach will enable researchers to look at genomic differences between single cells with much finer detail,” said Kun Zhang, a professor in the Department of Bioengineering at the UC San Diego Jacobs School of Engineering and the corresponding author on the paper.

The researchers report that the genome sequences of single cells generated using the new approach exhibited comparatively little “amplification bias,” which has been the most significant technological obstacle facing single-cell genome sequencing in the past decade. This bias refers to the fact that the amplification step is uneven, with different regions of a genome being copied different numbers of times. This imbalance complicates many downstream genomic analyses, including assembly of genomes from scratch and identifying DNA content variations among cells from the same individual.

Sequencing the genomes of single cells is of great interest to researchers working in many different fields. For example, probing the genetic make-up of individual cells would help researchers identify and understand a wide range of organisms that cannot be easily grown in the lab from the bacteria that live within our digestive tracts and on our skin, to the microscopic organisms that live in ocean water. Single-cell genetic studies are also being used to study cancer cells, stem cells and the human brain, which is made up of cells that increasingly appear to have significant genomic diversity.