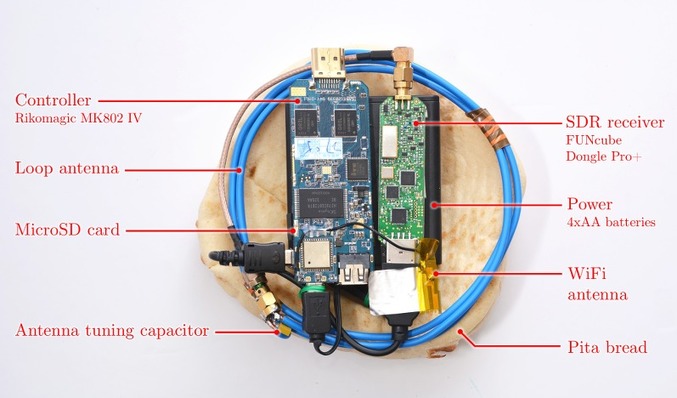 Researchers at Tel Aviv University and Israel’s Technion research institute have developed a new palm-sized device that can wirelessly steal data from a nearby laptop based on the radio waves leaked by its processor’s power use. Their spy bug, built for less than $300, is designed to allow anyone to “listen” to the accidental radio emanations of a computer’s electronics from 19 inches away and derive the user’s secret decryption keys, enabling the attacker to read their encrypted communications. And that device, described in a paper they’re presenting at the Workshop on Cryptographic Hardware and Embedded Systems in September, is both cheaper and more compact than similar attacks from the past—so small, in fact, that the Israeli researchers demonstrated it can fit inside a piece of pita bread.

“The result is that a computer that holds secrets can be readily tapped with such cheap and compact items without the user even knowing he or she is being monitored,” says Eran Tomer, a senior lecturer in computer science at Tel Aviv University. “We showed it’s not just possible, it’s easy to do with components you can find on eBay or even in your kitchen.”

Their key-stealing device, which they call the Portable Instrument for Trace Acquisition (yes, that spells PITA) consists of a loop of wire to act as an antenna, a Rikomagic controller chip, a Funcube software defined radio, and batteries. It can be configured to either collect its cache of stolen data on an SD storage card or to transmit it via Wifi to a remote eavesdropper. The idea to actually cloak the device in a pita—and name it as such—was a last minute addition, Tomer says. The researchers found a piece of the bread in their lab on the night before their deadline and discovered that all their electronics could fit inside it.

Sourced through Scoop.it from: www.wired.com