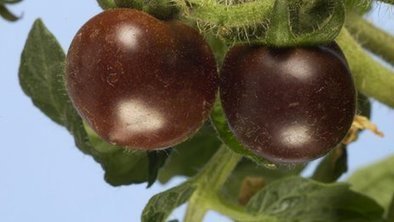 The prospect of genetically modified (GM) purple tomatoes reaching the shelves has come a step closer. Their dark pigment is intended to give tomatoes the same potential health benefits as fruit such as blueberries.

Developed in Britain, large-scale production is now under way in Canada with the first 1,200 liters of purple tomato juice ready for shipping. The pigment, known as anthocyanin, is an antioxidant which studies on animals show could help fight cancer.

Scientists say the new tomatoes could improve the nutritional value of everything from ketchup to pizza topping. The tomatoes were developed at the John Innes Centre in Norwich where Prof Cathie Martin hopes the first delivery of large quantities of juice will allow researchers to investigate its potential.

“With these purple tomatoes you can get the same compounds that are present in blueberries and cranberries that give them their health benefits – but you can apply them to foods that people actually eat in significant amounts and are reasonably affordable,” she said.

The tomatoes are part of a new generation of GM plants designed to appeal to consumers – the first types were aimed specifically at farmers as new tools in agriculture. The purple pigment is the result of the transfer of a gene from a snapdragon plant – the modification triggers a process within the tomato plant allowing the anthocyanin to develop.

Although the invention is British, Prof Martin says European Union restrictions on GM encouraged her to look abroad to develop the technology. Canadian regulations are seen as more supportive of GM and that led to a deal with an Ontario company, New Energy Farms, which is now producing enough purple tomatoes in a 465 square meter (5,000sq ft) greenhouse to make 2,000 liters (440 gallons) of juice. The first 1,200 liters are due to be shipped to Norwich shortly – and because all the seeds will have been removed, there is no genetic material to risk any contamination.