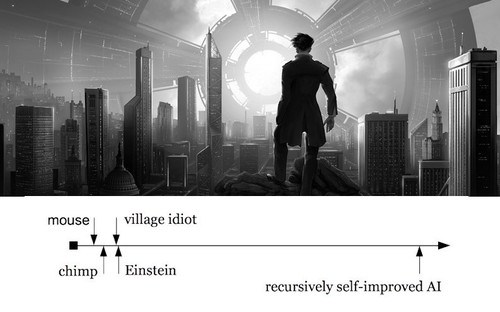 Why are AIs in movies so often of roughly human-level intelligence? One reason is that we almost always fail to see non-humans as non-human. We anthropomorphize. That’s why aliens and robots in fiction are basically just humans with big eyes or green skin or some special power. Another reason is that it’s hard for a writer to write characters that are smarter than the writer. How exactly would a superintelligent machine solve problem X?

The human capacity for efficient cross-domain optimization is not a natural plateau for intelligence. It’s a narrow, accidental, temporary marker created by evolution due to things like the slow rate of neuronal firing and how large a skull can fit through a primate’s birth canal. Einstein may seem vastly more intelligent than a village idiot, but this difference is dwarfed by the difference between the village idiot and a mouse.

As Vernor Vinge put it: The best answer to the question, “Will computers ever be as smart as humans?” is probably “Yes, but only briefly.”[1]  How could an AI surpass human abilities? Let us count the ways: