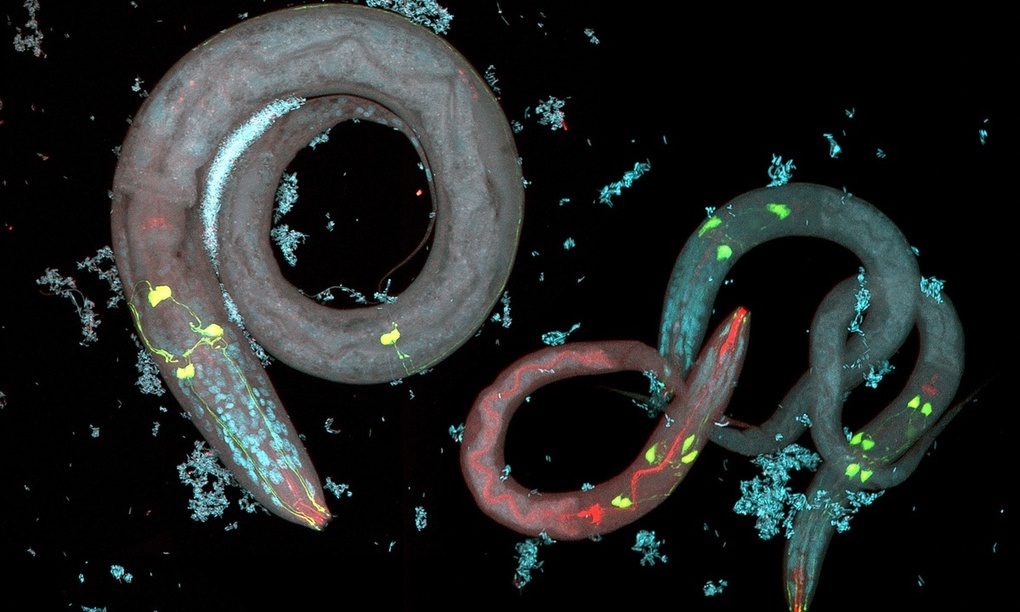 Scientists have bred worms with genetically modified nervous systems that can be controlled by bursts of sound waves. The tiny nematodes change direction the moment they are blasted with sonic pulses that are too high-pitched for humans to hear.

The pulses work by switching on motor neuron cells that are genetically modified to carry membrane channels that respond to ultrasonic waves.

Researchers said the worms demonstrate the power of a new procedure, dubbed sonogenetics, in which ultrasound can be used to activate a range of brain, heart and muscle cells from outside the body.

Sreekanth Chalasani, a researcher at the Salk Institute in La Jolla, California, told the Guardian that the procedure could one day replace deep-brain stimulation, an invasive procedure that delivers electrical pulses into people’s brains to treat symptoms of Parkinson’s disease.

Nematode worms do not usually react to ultrasound, but Chalasani found that they did when they were surrounded by a fluid containing microscopic bubbles. The bubbles, he found, amplify the ultrasonic waves which then pass inside the worms. The amplified ultrasound waves act on structures called TRP-4 ion channels, found in the membranes of some of the worms’ cells. The sound waves make these ion channels open up and activate the cells they are attached to, according to a report in Nature Communications.

To make ultrasound-controlled nematodes, Chalasani genetically modified the worms so that some of their motor neurons carried TRP-4 ion channels. When he applied ultrasound to the modified creatures, the sound waves were amplified by the microbubbles and transmitted into the worms, where they switched on the modified motor neurons.

The procedure has some similarities with optogenetics, a groundbreaking tool that allows scientists to switch neurons on and off with pulses of light. But Chalasani said that sonogenetics could have some advantages over that technique. Unlike light, which has to be sent down an optic fibre to the desired location inside the brain, low frequency ultrasound waves can pass through tissue unhindered, and so can be sent into the brain from on top of the skull.

“We believe that, using gene therapy and a therapeutic virus, it may be possible to make target human neurons temporarily susceptible to the ultrasound signal in a clinical setting for certain neurological treatments,” said Chalasani. Other applications could focus on muscle cells and insulin-producing cells, he added.

Sourced through Scoop.it from: www.theguardian.com